In this analysis, AeroAnalysis has a look at the the AerCap Q1 2020 results. Since the impact of the COVID-19 pandemic has become clear, or at least clearer, because there’s a lot unknown at this stage, many names in the travel industry have depreciated significantly. That depreciation stretched from the lodging industry to booking sites to airlines and cruise companies to jet makers. The link between jet makers and airlines, the aircraft lessors, was hit hard as well. In a recent report published for subscribers of The Aerospace Forum, AeroAnalysis discussed the opportunity that it sees in AerCap. In this analysis, AeroAnalysis analyzes the first quarter results and points out the various levers the company, as expected, is using to weather this storm. 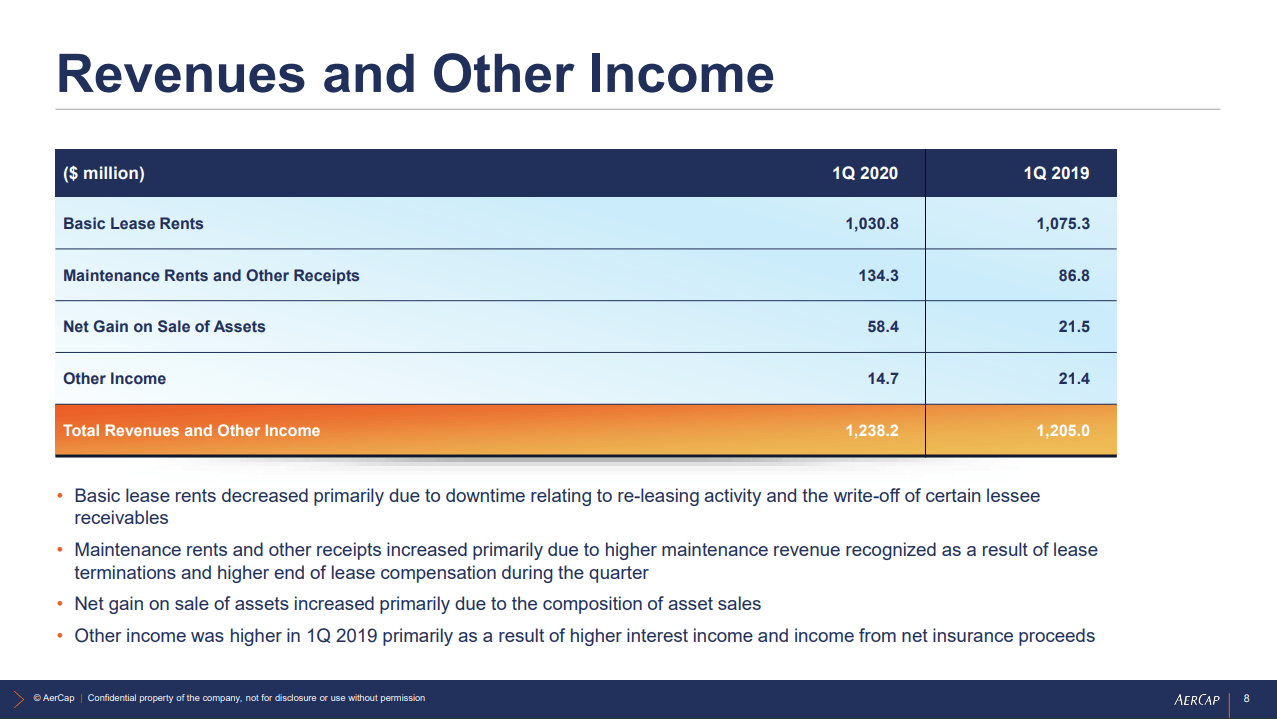 Revenues for the first quarter were in line with our expectations being just $1.8 million lower than expected. Year-over-year growth was driven by higher maintenance rents and other receipts and net gains on sales of assets offset by lower basic lease rents and other income. Q1 didn’t show any revenue decline, but that’s due to accrual accounting and does not mean that there were no pressures from COVID-19 during the quarter as we discuss in the company’s liquidity position.

We observed that costs declined 1% driven by SGA and interest expenses and lower non-cash items but higher leasing expenses. AerCap reported earnings of $2.14 per share, beating estimates by $0.42. Revenues were just modestly higher year-over-year, but Q1 results were rock solid and in any normal year would have been an indicator of a strong year.

With the changed state of the world and the industry, it’s more important to look at what actions AerCap is taking to support its own balance sheet, but also its customers.

AerCap currently agreed on $350 million covering two to three months of lease payments for some customers to be deferred and repaid during the remainder of the year. While it looks like there was no COVID-19 impact yet in the first quarter when looking at revenues, this is caused by the accrual accounting method. Using this method, revenues keeps being recognized even when they are deferred. Only when it’s probable that lease payments cannot be collected, AerCap switches to cash accounting where the negative difference between the security and maintenance deposits are settled with the already logged revenues. If those accrued customer revenues exceed the maintenance and security deposits, AerCap logs a negative impact on base lease rents. Subsequently, revenue is recognized when the cash actually comes in. The accrual accounting is the reason why Q1 showed no impact on revenues. During the quarter, switching to cash accounting for some customer has resulted in a $16.2 million headwind to recognized revenues. 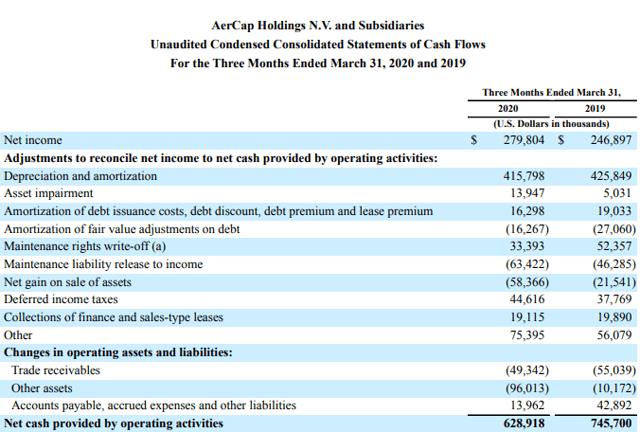 So, cash provided by operating activities is actually a better measure of customer payments. What we see is that operating cash flow declined by $116 million. AerCap has granted $350 million in lease payment deferrals which explains the decline in operating cash and the company is expected to agree on another $250 million in lease payment deferrals with customers. We are likely going to see decline in Q2 and rental payment collection in Q3 and Q4. Up to this point some 13% of the lease revenue is deferred until later this year. So, a >50% decline in share prices seems to be overdone to me. 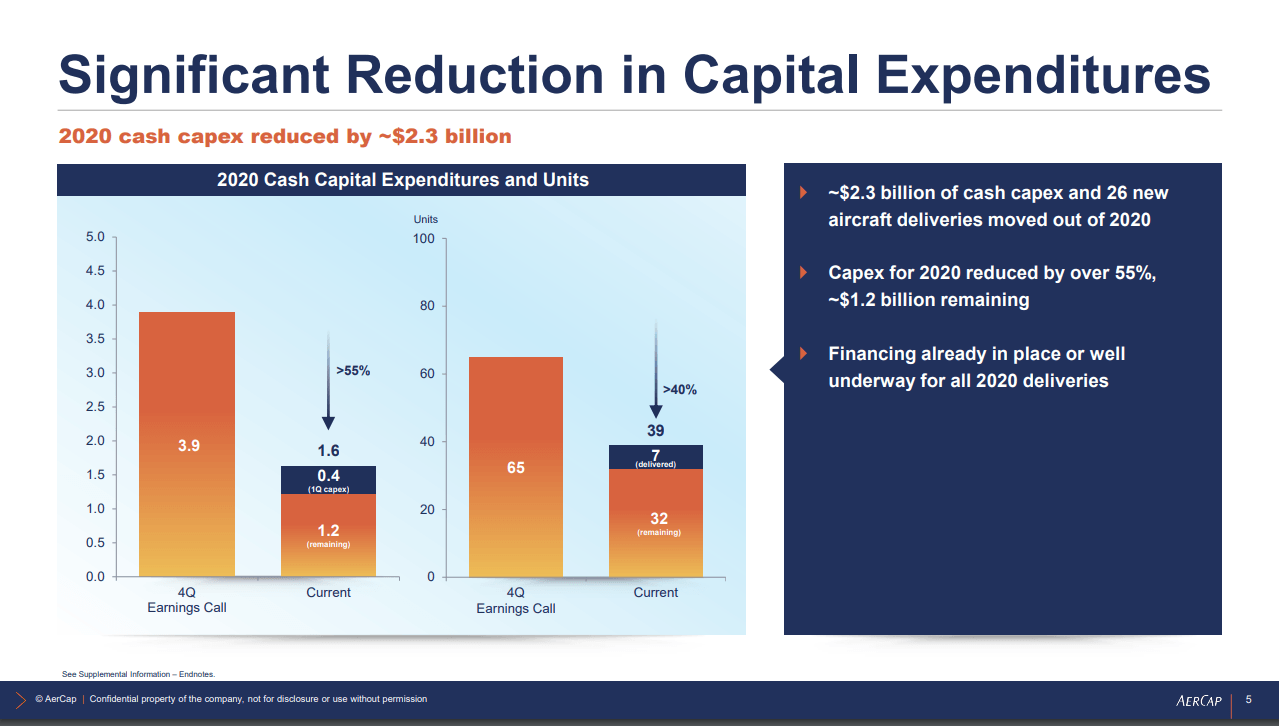 The big lever AerCap was expected to pull was capex reductions. That’s a lever that makes a lot of sense to pull, since all of AerCap’s capital expenditures are for aircraft purchases. Since demand for air travel has been eroded, it no longer makes sense to keep paying and keep taking delivery of aircraft that are not supported by demand. As a result, for 2020 capital expenditures has been reduced by $2.3B which is a prudent decision with cash conservation in mind but also with preserving the value of AerCap’s assets on the books in mind. AerCap will be taking 10 fewer Airbus A320neo family aircraft, 15 fewer Embraer E190-E2s and E195-E2s and one Boeing 737 MAX less than initially anticipated. The value of these aircraft would be around $1B with around $670 million in in-year and final delivery payments. So, the bigger reduction in cash capex will be coming from delaying future deliveries and associated pre-delivery payments on these aircraft. 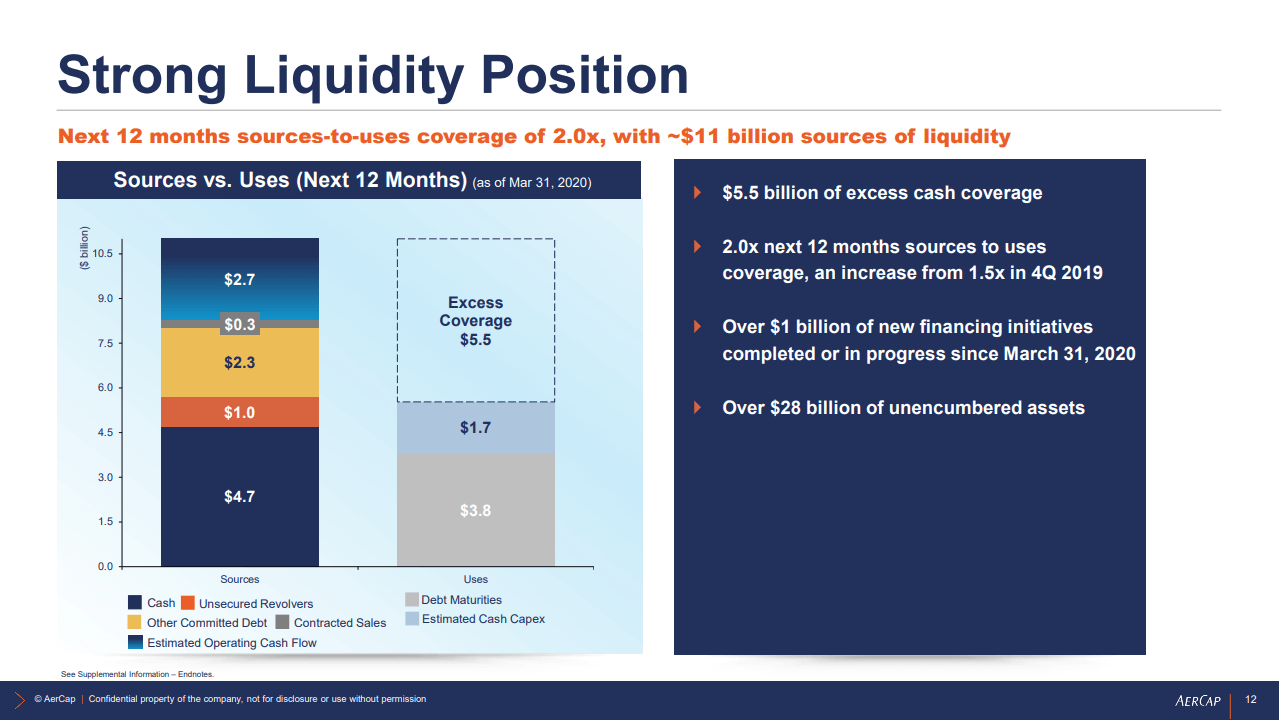 AerCap shares have tumbled since the market sold off in February, but this has been without regard for the strong liquidity. AerCap can cover its debt maturities of $3.8B and cash capital expenditures of $1.7B with its cash position plus the $4B revolving credit line (of which it used $3B by the end of March 2020). Next to that the company has $2.3B in committed debt and $3B in cash from operating activities for the year plus sales. So, AerCap can cover its uses even without cash flow from activities. I think that says a lot about the strong liquidity position the company has. The company is not even close to having to put assets up for sale to raise cash or raise additional debt. For now, it’s in a very comfortable spot given the challenging times for the industry. Even when excluding the $4B revolving credit line, the company can lean on cash, committed debt and operating cash flow and contracted sales. AerCap was able to repay $3B of the revolving credit facility by April as the lessor tapped that credit line as a precaution and saw the bond mark become increasingly inaccessible in the February panic but that has eased up quite a bit now.

Amidst AerCap’s share prices tumbling you would almost forget that the company increased its book value per share by another $2. AerCap tends to trade at .8 to .86 of its book value. That would imply that share prices should be $59.20-$63.60 or at least 100% upside from current prices.

The Q1 results presented by AerCap were solid on a revenue and EPS level, due to the accrued accounting method. On operating cash level, we saw a decline of 15% which illustrates that some lease payment deferral was already occurring in the first quarter. AerCap is facing risks with regard to non payment from its customers and aircraft residual value pressures, but even with those pressures the current share price levels are not justified as the company has a strong liquidity position. These are challenging times, but AerCap is positioned well to weather the storm and support the recovery on the air travel markets and does deserve to be trading at a higher price-to-book ratio than 0.4.

*Join The Aerospace Forum today and get a 15% discount*

The Aerospace Forum is the most subscribed-to service focusing on investments in the aerospace sphere, but we also share our holdings and trades outside of the aerospace industry. As a member, you will receive high-grade analysis to gain better understanding of the industry and make more rewarding investment decisions.