Annually Boeing and Airbus engage in a fierce order battle attracting a lot of attention. Both jet makers sell and deliver hundreds of aircraft each year and in our view that shows how robust the market is. In this report, we analyze Airbus sales in 2017. AeroAnalysis won’t be comparing it with the Boeing sales, because we think the sales figures themselves are interesting enough to have a closer look at. Would we mix in the Boeing numbers as well, it would become an article focusing too much on one company’s sales versus the other’s. That is something that we will do in another article.

It will not be a simple summary of the numbers, because we think a lot more observations can be made that are far more important than the numbers. We will also be looking at dollar values (list price and discounted prices), because – as a reader pointed out previously – the unit tallies do not make difference between a wide body sale and single aisle sale. In the order tally, you just lump the numbers and disregard that a wide body jets has a price 2-3 times higher than that of a single aisle aircraft. 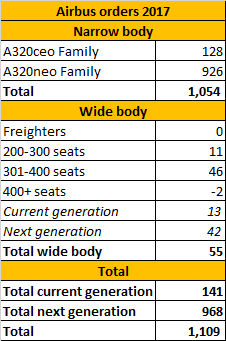 The table above already contains quite some information. Focusing on the narrow body segment, Airbus has sold 926 of its new engine option A320 family versus 128 A320ceo family aircraft. This is to be expected as the Boeing 737 MAX and Airbus A320neo families currently offer the most value to customers in the core of the market. Airbus also sold 128 current engine option jets, which likely are aircraft that have been sold at end-of-production prices possibly replacing some neo sales as well. Lower pricing is not uncommon for jet makers to do as production transitions from the current generation type to the newer. Twelve percent of all narrow body sales for Airbus were current engine option sales, while the remaining 88% is new engine option sales.

Switching to wide body aircraft for passengers and cargo, there were some noteworthy things as well. Airbus continues to see little to no interest for its A330-200F with no orders in 2017 and only 8 operators worldwide. Net-net, Airbus sold 11 aircraft in the 200-300 seat segment, which consists of the A330-200, A330-300 and Airbus A330-800. The 11 orders were for the A330-200, likely all of these orders came with a low price tag, while Airbus booked 4 orders for the bigger -300 but also had to cancel 4 orders for the Airbus A330-800. In our view the A330neo has a lot of potential, but it still has come to fruition and we would expect that airlines currently operating the A330ceo will be lining up for the A330neo at some point.

The other member of the A330neo family, the -900, which has typical 2-class seating that would put it in the 301-400 seat range had better sales. Two relatively unknown airlines, aircalin and newcomer Air Senegal, ordered 4 A330-900s while an unknown customer ordered 4 aircraft. Lessor Air Lease Corporation ordered 2 jets. Also the -900 is not a fast seller yet, but I think the backing the aircraft has received and continued to receive in 2017 gives some confidence about the future for the Airbus A330-900.

Airbus received 35 net orders for the Airbus A350-900 from key customers United Airlines , Air France (swapping A380 orders for the smaller A350), Ethiopian Airlines and China Southern Airlines. The European jet maker sold 1 Airbus A350-1000 aircraft to an undisclosed customer. This brings the net sales in the 301-400 seat segment to 46. We think that 46 is quite a low number, but the A330neo and A350 are relatively new. The first A330neo has yet to be delivered to its launch customer, while the Airbus A350-1000 will see first delivery soon. We think that especially for the A350, airlines are waiting for the Airbus A350-1000 to enter service before committing to additional orders and given the replacement cycle they have time to hold off.

The Airbus A380 saw its number of firm orders decrease as Air France swapped its order for the A350. The timeline for the Airbus A380 is looking extremely challenging as we discussed earlier, but a recent commitment from Emirates bought the jet maker some more years to secure sales from other customers.

Researching the aerospace industry and their products is fairly difficult, but you really don’t have to be a rocket scientist to come to the conclusion that single aisle sales are booming and the wide body programs not so much for Airbus. That doesn’t mean that these programs are in bad shape or have no future ahead, but selling only 1 wide body aircraft for every 19.2 single aisle aircraft does something to the dollar value per aircraft.

At list prices, the net dollar value of the orders is $137.7B for 1,109 aircraft. That puts the list value per aircraft at $124.2 million. Discounts are very common in the industry, but neither Boeing nor Airbus nor their customers are very eager to discuss discounts. After discounts, the value of the orders is closer to $61.5B or $55.4 million per aircraft which is around the value of an Airbus A321neo.

The dollar value may vary from other reports as different firms often used different base market values and assumptions.

As far as you can draw conclusions in this article, it is important to note that Airbus depended a lot on its single aisle sales this year selling almost 20 single aisle aircraft for every wide body jet it sold compared with 5 in 2016. Year over year the sales price per aircraft came down, but that is not a metric I attach a lot of value to other than that it tells you something about the mix of the orders but then in terms of dollars.

The total value of the net orders in terms of list prices as well as estimated market values did increase year over year, so that is something that Airbus will be keen on.

For 2018, we’d like to see Airbus booking more sales in the 301-400 seat segment. We think there is a lot of value to extract for the European jet maker there. The jet maker already announced during a livestream earlier this week that it has some wide body sales lined up for January 2018.