We already are nearing the end of the second month of 2020, but we have still been busy wrapping up the Boeing and Airbus delivery value overview for 2019. Obviously, 2019 has been an intensive year for the aerospace industry with the demise of the Airbus A380 and the problems with the Boeing 737 MAX. Orders always make headlines, but deliveries are where the cash comes in, and so for investors, it’s also interesting to look at the deliveries. Normally, we see that deliveries or orders are used as measures to see what Boeing (BA) and Airbus (OTCPK:EADSF) did better in a given year. For 2019, there’s no doubt that Airbus won that battle whether you measure it by orders or by deliveries, but it’s still interesting to see how the jet makers performed. That is not so much to see how one jet maker did compared to the other, but to see how they performed combined because that really shows how the Boeing 737 MAX crisis is affecting the industry.

In this report we will have a look at the Boeing and Airbus deliveries during 2020 and attach a value to those deliveries.

In order to make the comparison between Boeing and Airbus more useful, aircraft have been divided into the following categories: 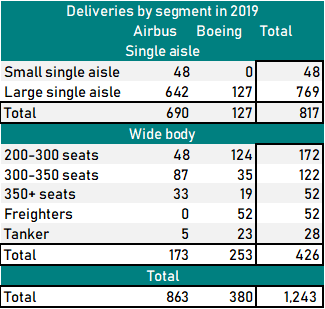 Boeing and Airbus were both set for record single aisle production in 2019, before the MAX crisis hit. Airbus had some problems in the supply chain and assembly of their Airbus A321neo aircraft with Cabin Flex interior but still managed to put out a record number of single aisle jets. Boeing was forced to halt deliveries of the Boeing 737 MAX which was to form the bulk of deliveries in 2019. While output should have topped 1,300 deliveries in 2019, single aisle deliveries fell sharply. 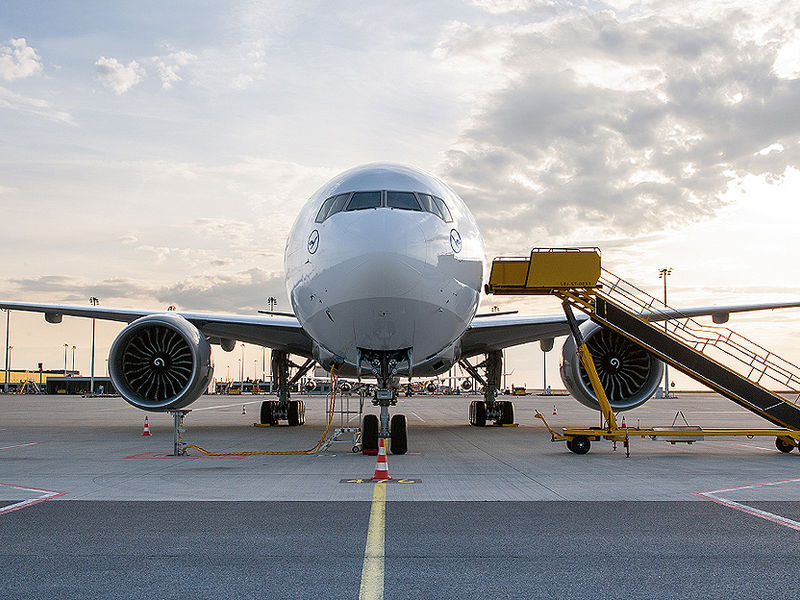 On the Freighter market, Boeing’s reign is clear. The jet maker has a complete line up in the form of the Boeing 767F, Boeing 777F and Boeing 747-8F vs. Airbus, which only has the Airbus A330-200F. The preference for Boeing’s freighter product is clear.

For the wide body segment, Airbus ended up with 173 deliveries vs. 253 for Boeing. Boeing is still the biggest supplier of wide body aircraft, but it’s Airbus that set the bigger steps on the passenger wide body market, while Boeing increased wide body output due to higher freighter and tanker deliveries. I think that could be indicative of jet makers meeting the limits of demand on the wide body passenger market. 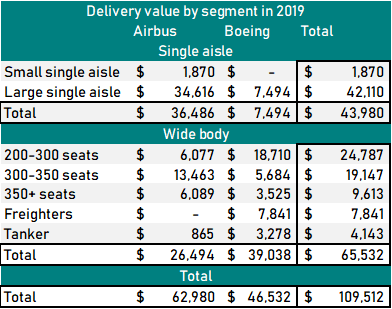 Note: Values may vary from numbers reported by other media outlets due to different base market values being used.

Conclusion: Boeing and Airbus delivery value down 9% in 2019

We can’t really draw a conclusion other than that Airbus easily won the delivery battle this year. For years, the delivery value tally had been used by Boeing investors to point out the strength of the company. That same tally is now in Airbus’ advantage. Due to the absence of the Boeing 737 MAX, the value share of wide body aircraft increased from 47% to 60%, partially driven by higher Boeing 787 and Airbus A350 deliveries. What I found noteworthy is that year-over-year the delivery value decreased by 9%, that really shows how big this crisis that Boeing is going through really is. On top of that, when comparing the delivery values compared to last year, the absence of the Boeing 737 MAX and a multi-year recovery trajectory do not bode well for Boeing.

From the 2019 order numbers we could already see that Boeing was meeting its limits on how much it could scale wide body production as the company meets the demand limits for passenger wide body jets and the delivery distribution shows that Boeing primarily relied on tanker and freighters to increase wide body delivery value. So, for further growth Boeing relies on single aisle production, while the Boeing 737 MAX remains grounded until Q2-Q3 2020 and after 2020, Dreamliner production will come down. Once the Boeing 737 MAX is cleared for service, the delivery stream will steam up, so we should be seeing a bump in delivery value in 2020, but beyond that part of the increase in single aisle production will be there to offset lower production plans on the Boeing wide body programs. So, Boeing relies on scalability of the Boeing 737 MAX to grow its revenues again and the company should be reminded how important the single aisle business is due to its unique scalable nature, something that the wide body segment definitely lacks.

Check out our Boeing order tracker