Commercial Aircraft: Drives revenues now and in the future 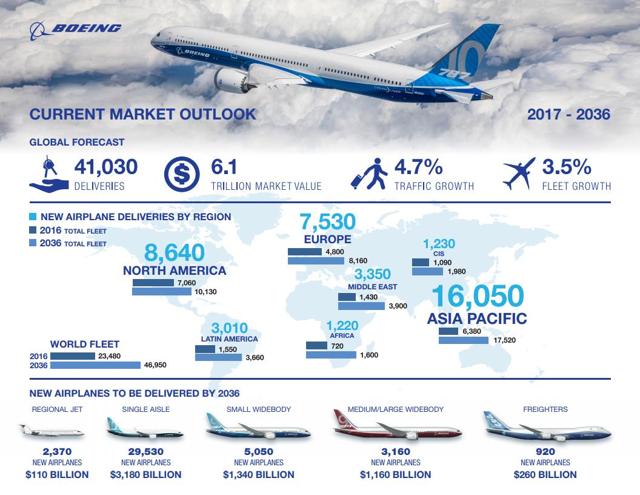 First of all, let’s zoom out a bit to show why commercial aircraft deliveries are so interesting to track. Boeing’s infographic basically tells it all. The coming 20 years, 41,030 aircraft will be delivered to airlines around the world but primarily in the Asia Pacific region though there is no region from which deliveries could be eliminated without this significantly altering the demand profile. Doing some simple math, the market is worth around $75B per year for Boeing. Given that Boeing currently gets $56.7B in revenues from its Commercial Aircraft business, the growth opportunity is huge especially if we consider that the simple calculation only gives an indication of the average value per year.

What can be seen is that Boeing’s Commercial aircraft revenues peaked in 2015 after which revenues were impacted by lower production rates on Boeing’s wide body programs. Nonetheless, the share of BCA revenues is significant being between 60 and 70 percent, but trending downward slightly. The image is somewhat skewed by Boeing’s Commercial Aircraft figures as Boeing has separated Commercial Aircraft Services last year, which are reflected in the years 2016 and 2017 but not for the years prior. Taking this into account by adding the commercial services back into the figures, AeroAnalysis observed that around two thirds of Boeing’s revenue is being generated by the Boeing Commercial Aircraft segment and with a 4.7% annual growth rate for revenues it easily outpaces the 1.9% growth rate observed company wide.

Somewhat unsurprising, though with steeper annual growth rates, the same can be observed in the first quarter results in the past 5 years. 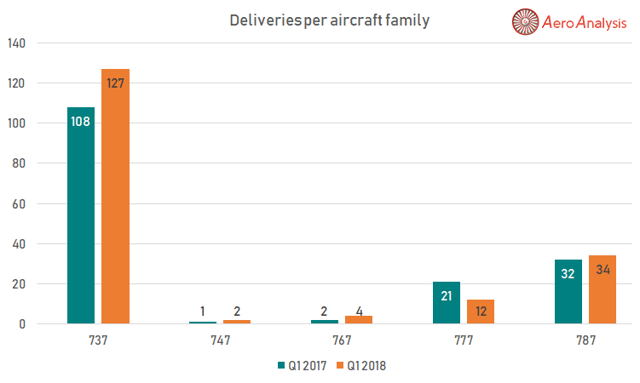 Overall, what can be seen is that deliveries on Boeing’s highly profitable single aisle program increased while deliveries decreased on its most profitable wide body program which is also visualized in the figure below. 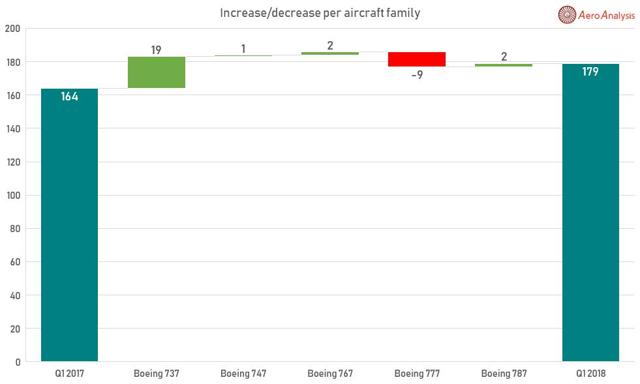 Using our internal pricing data, our revenue model has forecast Boeing’s commercial aircraft revenue in the first quarter of 2017 quite accurately. The model estimated revenues around $12.5B in revenues for Boeing’s commercial aircraft business, while the actual reported figure for Q1 2017 was $12.464B, which is less than 0.5% lower than the internal model would suggest.

Earlier this month, we pointed out that Boeing’s first quarter earnings might disappoint as delivery volumes were weak in the first 2 months of the year. If no uptick in deliveries would take place in March, the jet maker would most certainly fail to meet expectations. Boeing eliminated this downside risk as it showed strong delivery figures in March, which should pave the way towards good first quarter earnings. Boeing’s commercial aircraft deliveries remain a key focus point due to the existing importance of the business to Boeing’s overall business as well as the growth in the coming years. While the commercial aircraft market is growing, there sometimes are program specific challenges which make it harder for Boeing to increase revenues. The Boeing 777 program is a clear example of that and we believe it takes 3 aircraft programs to offset the loss in revenues from the Boeing 777 program. This shows 4 important things to us. The first thing being the scalability of Boeing’s single aisle business though this is not infinitely scalable. The second thing is the health of the freighter product line up and market with the 3rd and 4thelement being the importance of the Boeing 777 program in the past and the current and future importance of the Boeing 787. Simultaneously, the pressure on the Boeing 787 is increasing as it one of Boeing’s main cash and revenue drivers and we are currently seeing some pressure on deliveries.