Boeing posted its 4th quarter results and full year results on Wednesday before the opening bell. For Boeing, there wasn’t much to save after the Boeing 737 MAX was grounded and Boeing wasn’t able to resolve the problems within a year, almost completely wiping off a full year of production of Boeing 737 MAX aircraft from the 2019 delivery schedule.

In this report, we will have a look at the results per segment for the fourth quarter as well as the full year to see where Boeing met, exceeded or missed expectations. Given how Boeing’s year went, it is likely more a question of how badly Boeing missed estimates. One thing we do know beforehand is that the results are impacted by charges, so we will also look at the results with these items stripped out. Normally, I’d say that is reflective of Boeing’s day-to-day operational performance, obviously given the Boeing 737 MAX crisis… the addition of charges is part of Boeing’s day-to-day performance and we will merely strip those items off to see how Boeing’s other business segments have performed.

A first glance makes it look as if Boeing exceeded expectations by a wide margin. However, the sole reason for the “beat” is the fact that Boeing’s liabilities update was much lower than I expected at $2.6B compared to the $6.6B I expected. In a same way, Boeing seems to have fallen short of expectations in their Defense, Space & Security business, but this shortfall is partially caused by a $410 million charge on the Commercial Crew program, which I didn’t expect to hit Boeing’s books until the next quarter.

If we “correct” for this, we get the following:

What this shows is that the underlying performance excluding the Boeing 737 MAX and Commercial Crew program was actually good with a miss of less than 1%, primarily caused by unallocated items. So, revenue-wise excluding one-off items the fourth quarter looked OK to me. That, however, doesn’t change the fact that 2019 was a year in which Boeing should have posted revenues in excess of $100B for the second year in a row but didn’t get any further than $76.6B or $85B when we strip out the charges. So, the Boeing 737 MAX crisis cost Boeing roughly 20% of its revenues because the aircraft couldn’t be delivered. 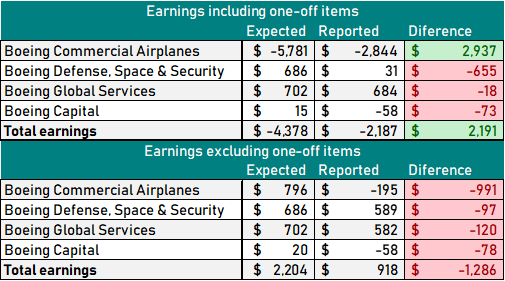 While revenues still look relatively decent, but also show what the absence of the Boeing 737 MAX does to Boeing’s overall revenues, the earnings -even with one off items stripped-  show Boeing’s pain. Including one-off items it still looks as if Boeing blew past our expectations, but this of course is caused by our initial liabilities estimate. More concerning is the fact that Boeing failed to meet earnings expectations with the one-off items stripped. For Boeing Commercial Airplanes, Boeing missed my expectations by nearly $1B. I am currently in contact with Boeing to determine what caused this, but I expect this to be the result of fixed costs remaining at an unchanged high level, possibly in combination with unfavorable block margins. Somewhat interesting is that the profits I estimated fetch extremely well with Boeing’s unit cost accounting method rather than the program accounting method, but it is still puzzling and I haven’t heard a single analyst asking questions about it.

Boeing, Defense, Space & Security saw profits being $97 million lower than expected reflecting lower volumes across the portfolio, although I haven’t been able to quite pinpoint what part of the mix drove down earnings from deliveries. It seems that the shortfall primarily comes from adjustments on long term contracts providing a $115 headwind to earnings (excluding charges).

Boeing Global Services earnings including one-off items look quite good. However, what we found is that it are the one-off items that made the earnings look decent. Boeing took a $293 million non-cash charge as it retired the Aviall brand name and it booked a $395 divesture gain. Meaning that underlying operating profits fell short by 17%, partially caused by some Boeing 737 MAX services not being rendered and overall weakness in the services mix.

I think what is very important to realize is that while the Boeing 737 MAX liabilities update was far lower than expected, it doesn’t mean that that cost couldn’t grow any further. On top of that the results in other segments was weak. Boeing shares gained because the liability update was modest, but what the share price appreciation post-earnings did not reflect was that the underlying performance of the segments looked weak with extremely little explanation from Boeing what drove down those earnings and extremely few questions asked from analysts. All with all, you can make the revenue look good, but if you look at earnings without one-off items you see that the in-quarter mix and profits didn’t look good and if you add the one-off items you are looking at earnings that “beat” my expectations but still are pretty ugly. 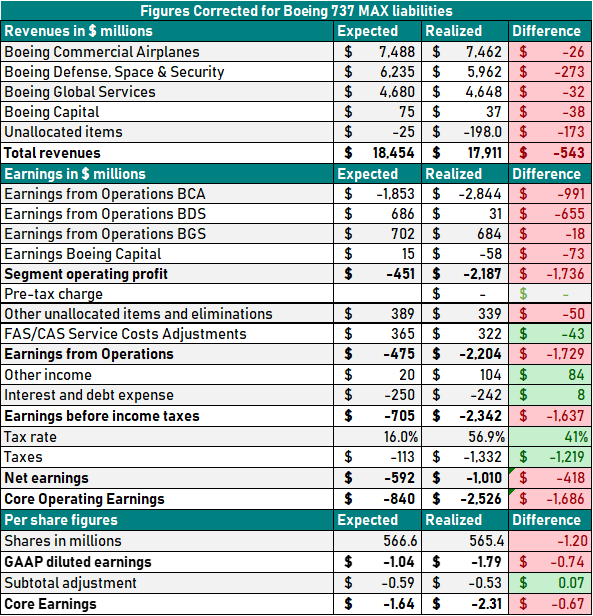 Looking at the full picture, what we see is that even if we correct for the difference in the liabilities update. Boeing missed expectations by roughly $1.7B, $1B comes from Boeing Commercial Airplanes and $655 million comes from a new tanker charge and costs for a new Commercial Crew mission. So, Boeing’s reported figures weren’t anywhere close to where we wanted to see them. In absence of the charges in the Defense arm, Boeing would have beat my expectations but that would be partially driven by the effective tax rate and not so much the underlying performance of Boeing’s core businesses. With that in mind, it is a bit odd that Boeing shares jumped post-earnings, not only because the earnings aren’t good but also because extremely little clarity was profited how Boeing Commercial Airplanes produced a loss, even after adding back the Boeing 737 MAX liabilities update. I have a position in Boeing and any investor can say what he or she wants about the Q4 earnings,  but the fact is that they weren’t good and even the only positive that Boeing did provide, namely the relatively tame liabilities update is something that could go up further in the future. I am certainly not impressed by Boeing’s Q4 earnings and I don’t think anyone should be.

Every few days, I get messages from people who point at how Boeing’s cash pile stands strong. Fact, however, is that cash is nice but when it is borrowed cash it looks a whole lot less impressive. Boeing ended the year with $9.6B in cash, which is slightly lower than in the previous quarter. This cash doesn’t come from operating activities, which saw full year cash flow being negative $2.5B. During the year, Boeing added $13.2B in debt and that is what fueled Boeing’s 737 MAX production, their dividend payment and the cash pile that by some is mistakenly considered a sign of strength.

After reviewing the quarterly earnings, I found that there is no reason for Boeing to be trading any higher than it did prior to earnings. The new CEO makes a better impression than his predecessor, but he has some weak spots while Boeing’s earnings didn’t look strong nor provided me with a sense of future earnings being de-risked. What already was obvious and became even more obvious is that Boeing is facing a recovery trajectory that is going to last years and the big question is whether investors have the patience as well as the trust in Boeing as a company to remain invested. Boeing shares traded higher because liabilities were lower than analysts estimated, but it completely ignored the fact that Boeing’s other results were extremely weak. Boeing hasn’t provided any update for 2020, but it is clear that cash pressures are there to stay throughout the year and even beyond that. The decision to halt Boeing 737 MAX production means that less cash will be spent on production and that would be a positive going into 2020, but that likely will be offset by some $4B in costs related to halting the production that will be recognized as expenses occur.