In late 2016, AeroAnalysis published a report in which we stated that Boeing would top 800 deliveries in 2017 but only book a marginal improvement in commercial revenues. In hindsight, we were wrong about the 2017 deliveries, primarily due to timing of the rate increase on the Boeing 737 program, which would be the main booster of higher deliveries. Additionally, the KC-46A deliveries for the Air Force were delayed into 2018 while deliveries for the Boeing 787 were slightly lower due to the Boeing 787-10 being added to the production system. What, however, did hold overall was the reasoning that margin improvement would be key to earnings in 2017 for Boeing Commercial Airplanes. 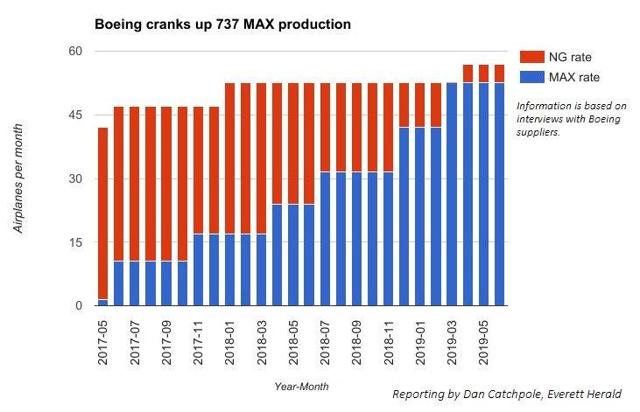 In 2018, Boeing has scheduled another ramp up to 52-52.5 aircraft per month. Based on interviews with Boeing suppliers, Dan Catchpole has compiled a ramp up pattern as depicted above. Based on this pattern, I am expecting 630 Boeing 737 deliveries in 2018. Should a ramp up slip by 6 months, that figure will fall to 600 aircraft, roughly equally split between the Boeing 737NG and the Boeing 737 MAX. This figure includes the military P-8 Poseidon aircraft.

In 2017, Boeing spent time selling its wide bodies, bringing the total deliveries for the year above the annual production rate. I expect 2018 to see normal levels of delivery output with 6 to 8 deliveries.

On the Boeing 767 program, Boeing is currently delivering freighter aircraft to FedEx and is producing the KC-46A tanker aircraft, which is behind on schedule due to engineering challenges. For 2018, I am expecting 7 deliveries to FedEx and the 18 tanker deliveries that were scheduled for late 2017 and early 2018. Boeing is also contemplating a relaunch of the Boeing 767-300ER production, but I do not think that will affect the production output in 2018.

In the most bullish scenario, Boeing Commercial Airplanes revenues could see a >10% increase. A detailed revenue impact report will be provided once Boeing will provide its full-year delivery report, but given the higher production and cost improvements on the Boeing 787, we would expect Boeing to see its cash flow growing for the 7th consecutive year.