Boeing (BA) reported second quarter before the opening bell on Wednesday (July 24). Earlier we shared our estimate for second quarter earnings and it’s needless to say that Boeing’s reported figures are quite a bit better than we anticipated.

In this report, AeroAnalysis International will have a look at the results highlighting where Boeing beat, missed or matched expectations. Boeing exceeded expectations, reporting core earnings per share of -$5.82, whereas the consensus was -$6.66 per share and we expected earnings around -$7.15 per share.

In this report we might be using some abbreviations for certain company segments. These are mentioned below:

Previously, we said we expected a revenue of $20B-$20.45B. Important to note is that this didn’t include the $5.6B revenue loss recorded during the quarter. Taking this into account, Boeing exceeded my expectations by $779 million. Unallocated items are hard to pin down, so I’m not too worried or puzzled about the difference there. Boeing Capital and Boeing Global Services earnings were in line with expectations. As some of my readers expected, Boeing would try to bolster its revenues (and earnings) via its Defense arm and that seemed to have happened as the company increased its revenue 8% year-over-year supported by higher volume sales. What actually puzzled me most was that Boeing beat by $719 million on commercial aircraft deliveries and in our modeling which has been extremely accurately to date we have only one way to get to comparable revenues and that is when we include the BCA part of military aircraft such as the KC-46A tanker and P-8A Poseidon. However, this goes directly against Boeing’s revenue recognition standard which it adopted this year. After years of writing and estimating commercial aircraft values, I have to admit that contrary to previous quarters I don’t have a clue how there’s such a big difference. As far as I could see there have been no deliveries such as contractual ones that aren’t reflected in Boeing’s delivery overview.

I’m not unhappy with the reported revenues as it was already clear that we would be seeing a steep revenue decline, but I’m somewhat uncomfortable with the revenue beat on Boeing Commercial Airplanes which I can’t reasonably match with aircraft prices and delivery volumes.

Boeing Commercial Airplanes earnings beat our expectations by $36 million, partially driven by lower than expected R&D costs. I’d consider the BCA performance more or less in line with expectations. The same holds for Boeing Global Services and Boeing Capital. Nevertheless, those segments already account for an $0.11 per share increase vs. our expectations. The biggest contributor to the earnings beat of the core segments is Boeing Defense, Space & Security which beat earnings expectations by $276 million or $0.49 per share. This performance was driven by a combination of higher sales volumes as well as higher than expected margins. The earnings beats on segment level already accounts for $0.60 of the $1.33 EPS eat. The other big item that caused our significantly lower expectations was a late change we made regarding tax benefits. After a comment from a reader we zeroed the taxes rather than taking into account a tax benefit. However, we found that Boeing posted a tax benefit of $485 million or $0.85 per share. 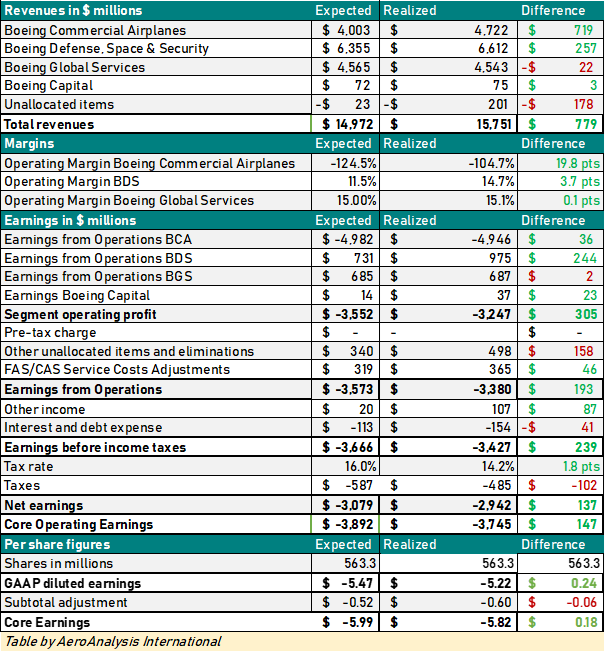 In the first quarter many investors were expecting a cash crunch, but this didn’t happen. However, in the second quarter we saw that Boeing’s operating cash flow was -$0.6B and its free cash flow was negative $1B. Boeing’s inventory increased by $2.45B, putting significant pressure on the operating cash performance while advances and progress billings remained stable and accounts payable increased. We will provide an analysis on Boeing’s cash flow statement in a separate piece, but the bottom line is that Boeing is using cash to build the Boeing 737 MAX aircraft that cannot be delivered while customers seem to have halted their pre-delivery progress payment, while Boeing increased its cash and cash equivalents by raising debts. Even if Boeing’s earnings beat is a slightly positive sign, the cash performance speaks volumes, and not in the good way.

In a report published a couple of days ago about Boeing’s charge recognition I noted the following:

Despite a certain loss in Q2, investors have appreciated Boeing’s announcement regarding the charge, added production costs and timeline for return to service. Although I also can appreciate the timeline and cost estimate, I think one should be aware that all of this is based on estimates where further delays drive up costs by hundreds of millions of dollars at a time.

We listened to Boeing’s earnings call, and what was already clear for me became even more clear during the earnings call and that’s the current schedules and cost recognition are in no way firm. If the schedule slips and at this point, we have no valid base to assume it won’t, then we might see additional cost growth as well as further decreases in Boeing 737 production and possibly even a temporary halt of 737 MAX production. So, what Boeing has now is an estimate and it’s an uncertain one. As expected, Boeing did not provide any 2019 guidance and instead discussed its financial outlook, which didn’t provide any deep insight.

So, there is a plan, but that plan is subject to change and Boeing currently isn’t in the position to take that uncertainty away. On top of that, due to problems with the GE9X turbofans, the fist flight for the Boeing 777X is now scheduled for 2020. The maiden flight was previously already delayed from March 2019 to June 2019 to fall 2019 and is now further delayed. While the problems lie with the engines manufactured by General Electric (GE), for Boeing this is disappointing, and the delay is so big that the jet maker now has to secure additional sales for the current generation Boeing 777.

Boeing beat on earnings and revenues driven by strong BDS margins and revenues, but with that all positives have been said. Boeing is managing, but it doesn’t seem certain of its planning and the company can’t provide any certainty because for a return to service Boeing depends on the certification progress of global aviation regulators and customer schedules. Boeing does have a plan to ramp up towards a production of 57 Boeing aircraft per month in 2020 and push out stored aircraft at an increased rate to customers, but everything related to the Boeing 737 MAX hinges on recertification and that process has been slow and uncertain.

Boeing shares are currently trading at the $360-$365 level, down 3%, and having listened to Boeing’s earnings call I can understand why: The company is facing extremely challenging months and it’s not in the position to provide clarity or take doubt away. That’s not a good position to be in for a company that was a market darling a year ago. I believe Boeing will solve the problems, but there’s little to be positive about when we look at financial performance and schedules.