The aerospace industry tends to be a relatively closed one, making it relatively difficult to analyze and understand. That comes on top of the complexity of the industry. For investors without in-depth knowledge, this makes the industry somewhat difficult to invest in, but there certainly are moments where the jet makers such as Boeing  and Airbus become somewhat more transparent. This happens during the airshows when jet makers launch new products, give product presentations and make or announcements. The order announcements usually are a mix of customer reveals, new orders and orders pending finalization. So, via these airshows, you are given quite a nice insight into the sales pipeline.

AeroAnalysis will exclusively cover interesting news from the show and order announcements along with commentary.

We are not expecting a launch for the NMA. In fact, Boeing’s management has used the airshow and the pre-air show conferences to explain why it is in no hurry to launch the program. In a previous report, we explained that in a perfect development scenario, a 2025 service entry is possible for the Boeing NMA. We continue to believe that with targeted reduction in specific fuel burn set by some turbofan developers, a 2027 or late 2026 service entry fits better in the overall timeline. Any faster development in combination with compression in the time between the first engine run and the service entry is considered adding risk to the development time frame. 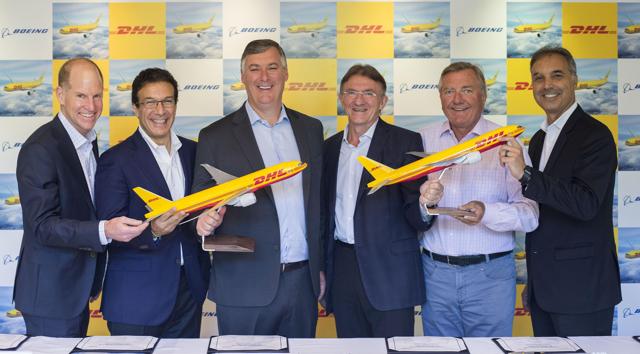 Seemingly, Boeing announced 205 orders and commitments worth almost $25 billion. However, splitting between firm, LoIs/MoUs and customer reveals, the reality of Day 1 on the Farnborough International Airshow is a whole lot less rosy.

Conversion as part of firm contract:

What we see is that out of 205 orders and commitments, just 54 were “new” business. 24 aircraft were firm orders, and 30 aircraft were MAX 8 to MAX 10 conversions. 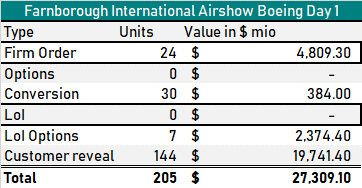 What we see is somewhat disheartening but not so much of a surprise. Seventy percent of the announcements were merely customer reveals, which means that slightly more than seventy percent of the list price value has already been logged in the books. Options are not really interesting to look at, since it can take years before they are logged as firm orders, if they ever do. This leaves Boeing with 24 firm orders and 30 conversions valued at $5.2 billion at list prices. For Boeing, Day 1 of the Farnborough Airshow showed very little of its sales pipeline going forward and was inflated by the customer reveals.

Whereas Boeing can talk about a new jet that has yet to be built, Airbus is not working on an all-new jet, but it can certainly use the moment to talk down the NMA prospects and point at the Airbus A330-800 as a fitting solution and the Airbus A321LR as well as a possible upgraded variant. Additionally, it lies in line of expectation that the company would use every moment possible to put the Airbus A220 in the spotlight. 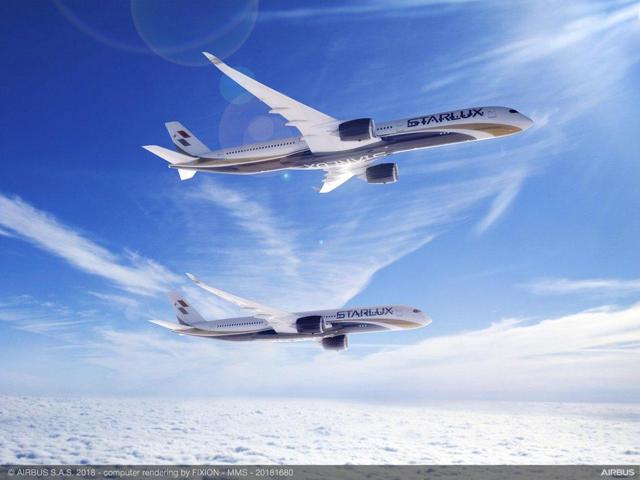 Being behind in the net order race by 259 units and Boeing booking 24 firm orders on the first day of the Farnborough International Airshow, there is no doubt that there is pressure on Airbus to announce a significant number of new orders during the show. 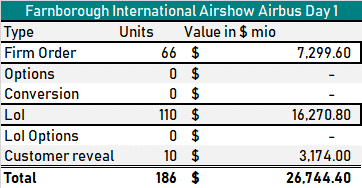 What we see is that on the first day of the show, Airbus depended a whole lot less on inflating its numbers with customer reveals. The European jet maker announced 66 firm orders, narrowing the gap with Boeing, and 110 tentative agreements which could be finalized in the near future.

Besides Boeing and Airbus, the smaller jet makers and regional propeller aircraft manufacturers are also active on the airshow:

As Airbus was able to rake in more order at the first day of the air show, Boeing sent out a press release announcing $2.1 billion worth of service contracts. The announcement fits Boeing’s focus on services and might give the impression that the company raked $28.4 billion worth of business versus $26.7 billion for Airbus.

At first, one would think that Boeing was the big winner of Day 1 with an overall announcement tally for 205 units valued at $28.4 billion, including services. However, we need to be fair here and point out that much of the “value” comes from customer reveals. Airbus depended a whole lot less on customer reveals and announced 66 new orders and 110 commitments and only one customer reveal for 10 Airbus A350 aircraft.

This also shows in the order value (which includes commitments), where Airbus’s tally reached $23.6 billion, versus $5.2 billion for Boeing. Obviously, this has only been the first day of the airshow, but if Boeing depends on customer reveals for the remainder of the show, it could happen that Airbus takes a big step during the Farnborough International Airshow to close the order gap with Boeing.