The aerospace industry tends to be a relatively closed one, making it relatively difficult to analyze and understand. That comes on top of the complexity of the industry. For investors without in-depth knowledge, this makes the industry somewhat difficult to invest in, but there certainly are moments where the jet makers such as Boeing  and Airbus become somewhat more transparent. This happens during the airshows when jet makers launch new products, give product presentations and make order announcements. The order announcements usually are a mix of customer reveals, new orders and orders pending finalization. So, via these airshows, you are given quite a nice insight into the sales pipeline.

AeroAnalysis will exclusively cover interesting news from the show and order announcements along with commentary on Seeking Alpha.

In this report we will cover events and order announcements for Day 3. For coverage on the previous days check out the links below:

Why tracking announcements is useful

Above, we briefly laid out the differences between the various types of announcements. Understanding the differences already helps readers a lot to determine whether the announcements are meaningful or not. Mainstream media has always lumped numbers regardless of announcement type creating a distorted picture. By splitting out these announcements, you get a much better feel of what might end up in the order book during a jet maker’s next order book update, what is in the pipeline to materialize on the short to mid-term and what is really a ‘might materialize one day’ announcement. To those that already know where and how to make the splits properly, daily coverage might seem to be a bit too much but given that I write for a broad audience the majority does not make the split or does not have the time to make the split and that is why we launched the airshow coverages. We also have to add that even contributors on Seeking Alpha often don’t know the differences and associate order inflow with a justified immediate positive impact on share prices or earnings. So there are many reasons to keep covering this subject and raise awareness instead of going with the euphoria. Some readers don’t see the point in daily coverage. I can be brief about that: Daily coverage gives you the most complete coverage and since airshows can end with 1,000+ orders and commitments the last thing you’d want is to read a 30 page report on all 1,000+ commitments. After each day of the airshow comes to an end, we spend multiple hours filling in the tables, calculating and cross-checking before we publish a report on the daily order announcements. If we had to do it after the airshow, this would require us to spend over a week checking the numbers and verifying them plus several days writing and cutting the reports into readable pieces. By doing daily reports, we get the report to you hours after closing of the day instead of weeks after the airshow ended.

So, these are the reasons why we split announcement by types on each day. I hope you do understand the reasons for me to do it in this way. Any feedback you have on improving this coverage is appreciated. 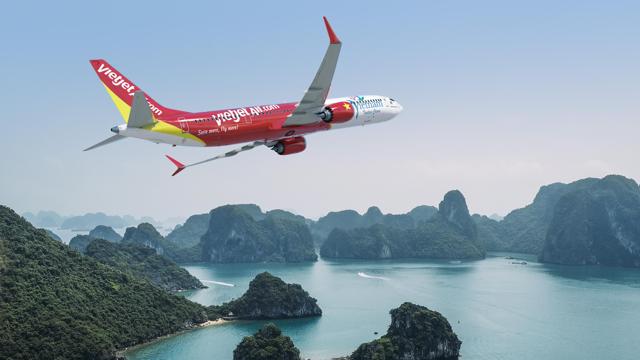 Seemingly, Boeing announced 193 orders and commitments worth almost $23.8 billion. For a balanced view we have to split between firm, LoIs/MoUs, customer reveals and account for options.

On the third day of the Farnborough International Airshow, Boeing announced no firm orders and all order announcement it did make for aircraft were order intentions: 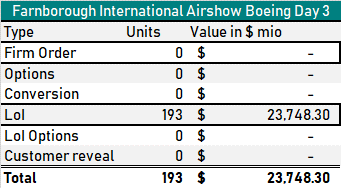 On the Day 3, Boeing’s next generation single aisle product took the main stage with order intentions for 193 aircraft valued $23.75B at list prices. There was no order news on wide body jets or freighters that dominated the first 2 days.

For Airbus it was quite an interesting day, despite there being no big order avalanche. The Airbus A350 has been certified in China clearing the path for deliveries of Airbus’s composite jet to China. Sticking to wide bodies, Airbus CCO, Eric Schulz expects to sell some Airbus A380s this year, which would be a positive for the struggling program. EasyJet took delivery of its first A321neo, but also said it is not interested in an upgraded variant of the aircraft or the Airbus A220. 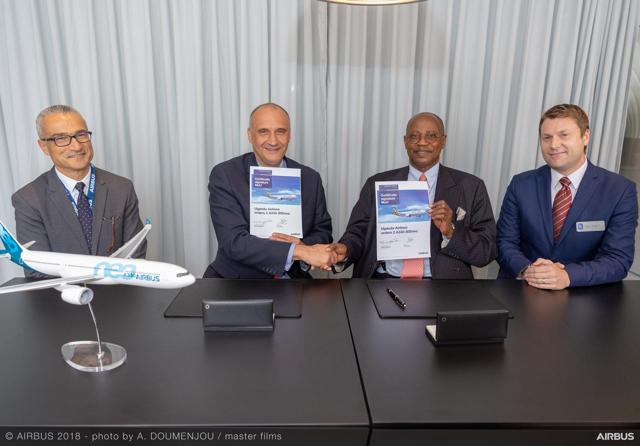 During the 3rd day, Airbus signed an agreement with Singapore’s Defense Science and Technology Agency to develop 3D printing of spare parts for the Airbus A330 Multi-role Tanker Transport aircraft.

Another very interesting agreement was between Airbus and International SOS, the world’s leading medical and security risk services company. The parties have signed a Memorandum of Understanding to jointly study the viability of using aircraft or unmanned systems to deliver medical cargo and supplies.

There also was order inflow for Airbus: 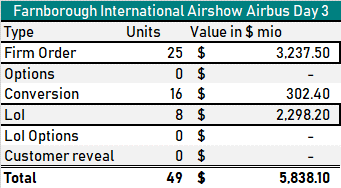 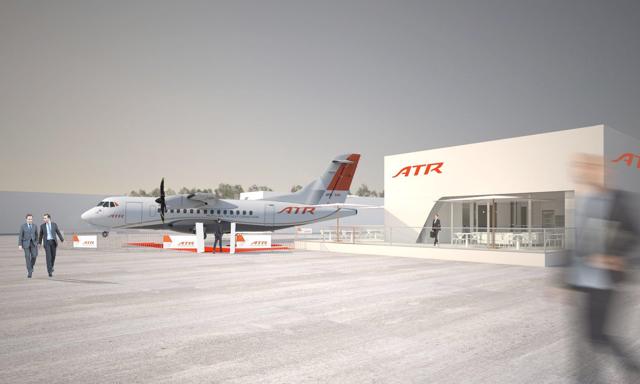 On day 3 the smaller jet makers had some announcements as well:

Day 3 was quite a tranquil one compared to the previous 2 days. Still, it has to be noted that the 3rd day usually is quite a slow one and compared to the 3rdday of the Paris Airshow and Farnborough International Airshow it was an above average day as far as I can recall. Boeing announced commitments for its single aisle product while Airbus had some important announcements for the Airbus A330neo.

With one day remaining, Boeing, Airbus and the smaller jet makers could actually make the 2018 airshow the best one in years. Boeing has been announcing a lot of business for its freighters as we anticipated and discussedwith readers on the 20th of June, but the Boeing 787 and Boeing 777X have not yet seen big announcements during the show while Airbus has been able to announce some orders and commitments for the Airbus A350 but has yet to meet expectations with the Airbus A330neo. Before the airshow we highlighted some possible announcements, but so far very little has materialized. On Day 4, we hope to see Boeing and Airbus ending on a high note.