With 2017 having come to an end, the order battle between Boeing and Airbus has been concluded as well and a new annual order battle has started. In this article,  AeroAnalysis will conclude who can crown itself the winner of 2017 in terms of orders. Not too many years ago, there would be some negativity surrounding Boeing, primarily on the Boeing 787, and back then Airbus bigger order inflow was being used to ‘demonstrate’ that Boeing was losing market share. Fast forward to 2017 and investors are more aware than ever that it takes a delivery to alter the market share and preferably you want to have Company C deliver aircraft to replace aircraft of Company D to grow market share fastest. It is also in deliveries where most cash flows in. So, orders are nice and they do have meaning but as a company you should also position yourself in such a way that it extracts value for shareholders in an efficient and sustainable way.

The order battle in numbers that matter 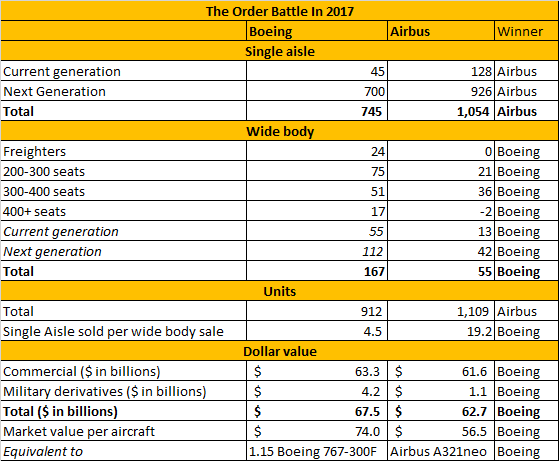 Airbus booked a ‘convincing win’ in the single aisle market. It sold more current engine option jets, though you can question how much of a win that is in a time where you want to sell your neo jet. Airbus also sold more next generation single aisle aircraft. The question is ‘At which price did this come?’. We expect that Boeing handed out significant discounts on the MAX 10 launches and the 175 single aisle jets sold to flydubai, while Airbus gave significant discount on the 430 aircraft ordered by Indigo Partners’ portfolio airlines. Airbus discounts are expected to be higher, but the difference is not as big as some portray it to be.

Going to the ‘units’ section, Airbus wins with 1,109 net orders versus 912 net orders for Boeing. However, what is very important to note here is the order mix; The more wide body jets you sell, the higher the dollar value. Boeing sold 4.5 single aisle jets for every wide body it sold, Airbus sold 19.2 single aisle jets. So, why did I mark Boeing as the winner here? Because it reflects a more appreciable mix of wide body versus narrow body aircraft. Almost 20% of Boeing’s sales were wide body aircraft, while for Airbus this was not even 5%! What this should tell you is that a whole lot of single aisle sales that Airbus announced in 2017 were in fact there to offset low sales in the wide body segment.

What the unit tally doesn’t quite capture is, as we discussed above, the order mix and more importantly the impact this has on dollar value. In the end it is all about dollars and dollars profit. That is where Airbus doesn’t ‘win’. Airbus sold more aircraft, but if you take into account that in terms of base market value 1 wide body sale equals roughly 3 single aisle sales then you can see where it gets tricky for Airbus to win in terms of dollar value. With that in mind if all of the jet makers’ sales were single aisle aircraft to come to the dollar values, Boeing would end up with 1,266 sales versus 1,231 for Airbus.

For me, the dollar value is what counts when assessing the order battle and what we see is that Airbus booked $61.6B worth of orders versus $63.3B for Boeing. There is some added value for military derivatives of commercial aircraft, this has been calculated as the difference between the price of the military product versus the commercial counterpart and there Boeing adds another $4.2B versus $1.1B for Airbus. So, Airbus booked 21% more orders during the year but it was Boeing that booked 7% higher sales in dollar value. What is not included in these figures are the bulk discounts. Airbus has likely given more discounts on the bulk orders than Boeing, but Boeing is expected to have added some discounts on the Boeing 737 MAX 10 launch orders. We think, it pretty much adds up to the same number for both jet makers, although you would expect that Airbus has been giving out orders left and right.

The average value of the jets Airbus sold is $56.5 million, equivalent to an Airbus A321neo, which is interesting because that is a jet that helps Airbus outselling Boeing on the single aisle market. The average value for Boeing is $74 million comparable to a Boeing 767-300F plus 15 percent.

Airbus sold more aircraft in 2017, but with the mix tending towards single aisle aircraft the jet maker has not been able to win where it matters and that is in terms of dollar value. Marketing can do a whole lot to make one look better than the other, but the dollar values tell enough. We view Boeing as the winner of the order battle of 2017.

What is going to be interesting is whether Boeing will be able to keep the crown when it comes to deliveries after 2020. Airbus expects that by 2020 it would deliver more jets than Boeing and that would make things interesting. Is that a moment where Airbus will become the more attractive investment or does Boeing still offer the best value to shareholders?