This report was prepared as an early access report for subscribers of The Aerospace Forum. At the time of writing this report, oil futures were taking a massive hit of 20% after Saudi Arabia cut its export prices by 10% and increased production. The move followed after Russia refused to cut oil production to stabilize oil prices, infuriating Saudi Arabia. Slashing oil prices is directly targeted against Russia, but it hits all oil producing countries and hits countries with a high breakeven price on oil production harder than Saudi Arabia.

In this analysis, we have a look at why lower oil prices are a double-edged sword for airlines. I will be using Delta Air Lines (DAL), which is part of the JETS ETF (JETS), as an example, which I consider to be a preferred investment in the airline industry due to their approach to the business, but this story holds for all airlines.

The fuel bill itself already is something that works both ways for airlines. Low oil prices obviously mean a lower fuel bill and that itself is a good thing. In 2019, Delta Air Lines spent $8.5B on fuel, giving it a 21.1% weight in the airline’s total operating expenses. To protect itself against volatility in jet fuel prices, many airlines are hedging fuel. As oil prices head higher, that protects the business against the price movement, but if fuel prices head lower that means an airline is making higher costs than it is supposed to on the hedged portion of the fuel. Delta Air Lines has a relatively good strategy, though spread over several years it has lost $8B due to fuel hedges. So, having a good fuel hedge strategy is important where you want to have some degree of certainty on the pricing but also be able to benefit from declines in the fuel prices. A good example of a fuel hedge that could backfire is that of Delta Air Lines’ partner Air France-KLM (OTCPK:AFRAF). The company hedged 60% of its fuel and on Dec. 31, 2019, provided a $584 million hedging loss estimate to portray the sensitivity to a $10 decline in oil prices per barrel. Since then, oil prices declined by $20 per barrel, which could put the hedging losses in excess of $1B. 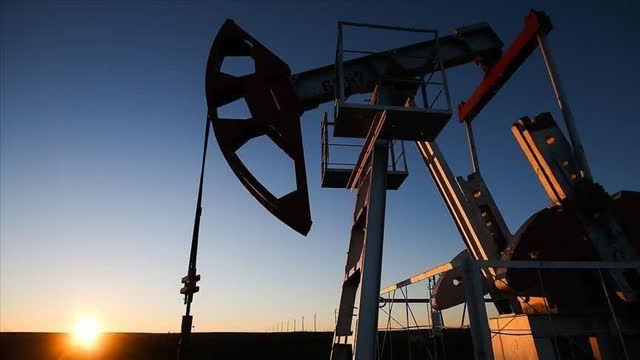 As oil prices tanked on Friday, the 6th of March, Air France-KLM gained 3.3% in a move contrary to the market. This move was not unique to the company and actually more airlines ended in the green, though for Air France-KLM the move is not completely rational as will not fully benefit from lower oil prices.

Also Delta Air Lines, apart from its $8B in hedging losses, hasn’t been lucky with their strategy to reduce impact of volatility in oil prices and lower the fuel bill. Years ago, the company took over an oil refinery in an effort to reduce its fuel bill but primarily due to scale disadvantages, making a meaningful difference to the fuel bill has been challenging. So, lower fuel prices do not necessarily mean lower fuel bills to the same extent as portion of the fuel is being hedged. 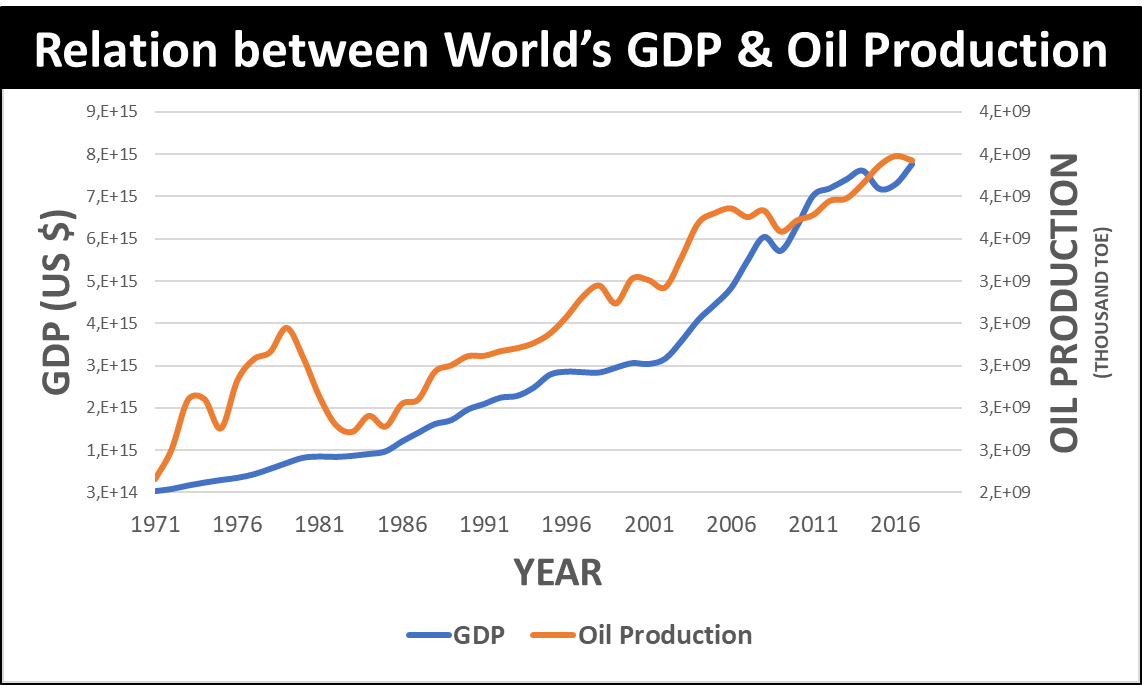 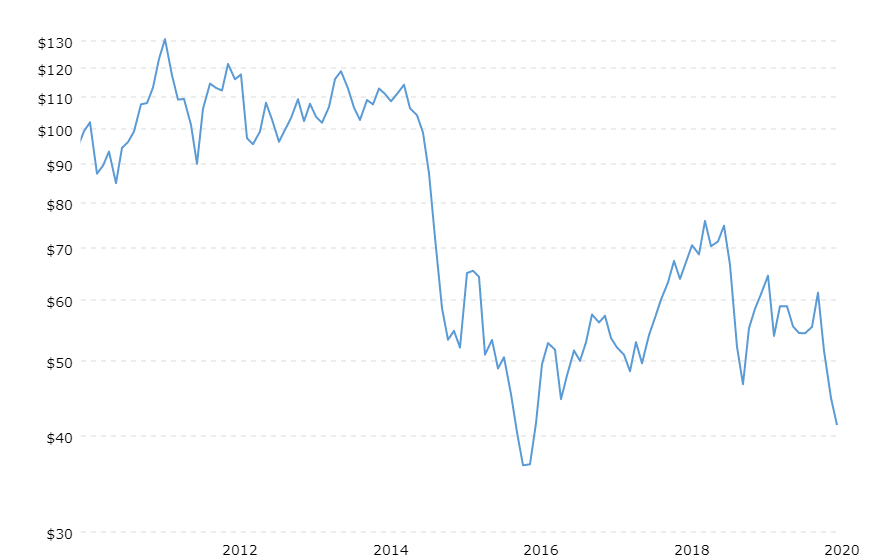 Looking at oil prices, what we see is that the price hasn’t been stable over the past six years. In 2014, oil prices fell as supply exceeded demand and oil-producing countries tried to stabilize prices ever since as many of the oil-producing countries depend on oil production at reasonable price levels. The downward price movement suggests that demand is falling short of production and that could be an indication of economic slowdown. With COVID-19 hitting China and spreading out globally, there’s additional economic pressure and so there’s additional pressure on demand for oil, which is why Saudi Arabia wanted to reduce oil prices. The lower oil prices don’t just trickle down to stock markets via names in the energy sector, but via the underlying GDP numbers, which are under pressure, as well: 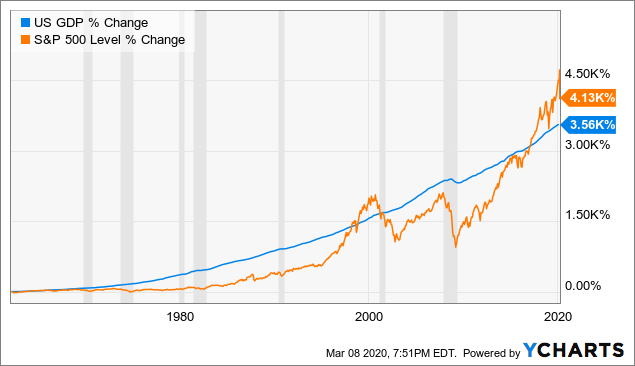 So, while low oil prices seem to be somewhat positive for airlines on the condition that they have a suitable fuel hedging policy, lower oil prices as an indicator of slowing economic activity aren’t good for anyone. Airlines certainly are no exception. 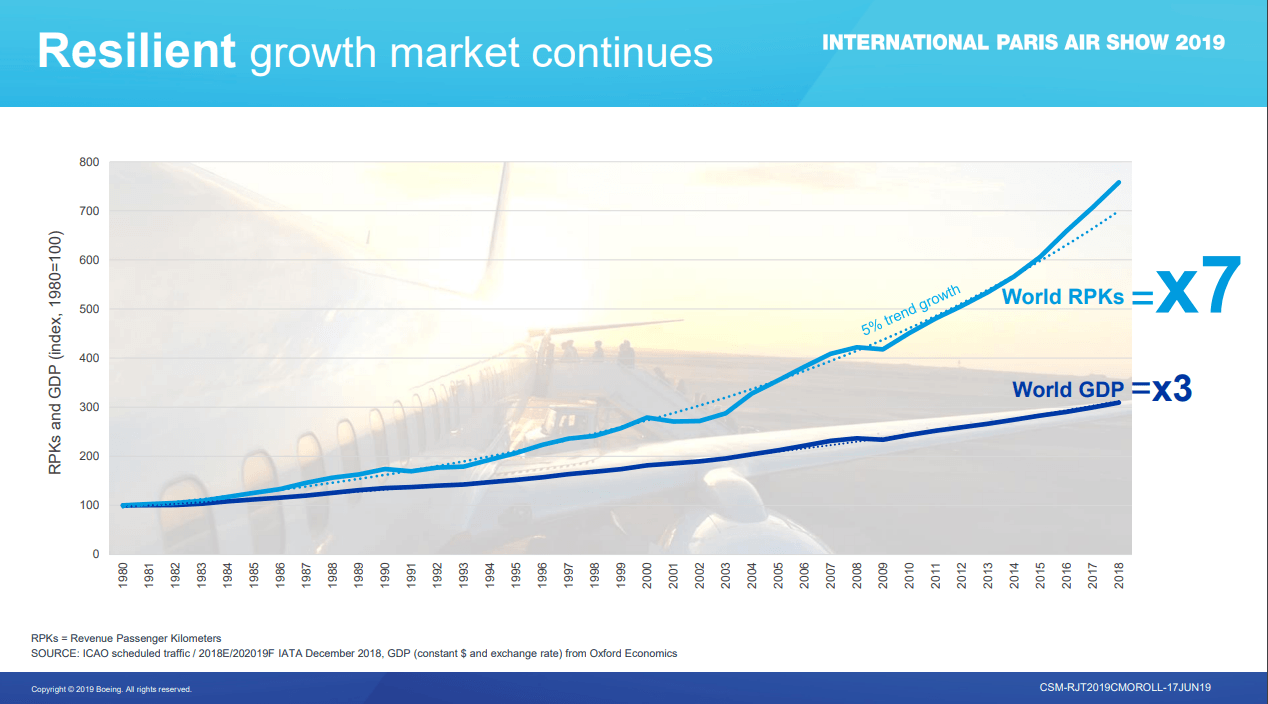 To see this, you just have to look at Boeing’s slide deck from last year’s Paris Airshow where they showed that revenue-passenger-kilometers are supported by GDP with a strong multiplier. Continued RPK growth underpins demand from airlines for new aircraft.

We can now connect all dots. If economic activity reduces such as has been happening due to COVID-19 and might take more serious forms in the coming months, oil prices will decline (further) if oil production is not brought in line with demand while reduced economic activity could mean slowing or even reduced demand for air travel. So, the lower fuel bill that airlines might be seeing is an extremely tiny part of the picture. Lower oil prices can be considered an indicator of slowing economic growth which supports growing demand for air travel.

Looking back at the 2014 oil price crash

Important to note is that world GDP growth has been more or less flat over the past few years as growth in China has been slowing, hence we saw agreement among the OPEC members to cut production to stabilize the oil prices (balancing supply and demand) in recent years. Exception, however, was in 2014 when oil prices declined sharply. On one hand, we had a big increase of US shale oil production, and on the other hand there were the concerns about slowing economic growth in China, which kept oil price levels depressed. In 2014, Saudi Arabia blocked a cut in oil production hoping to smoke out shale producers in the US. That was the story in 2014. Much of that holds today as well, except for the fact that the price collapse of oil is triggered by a combination of growth concerns regarding China but also globally stemming from COVID-19 and instead of the US, it was Saudi Arabia amplifying the demand-supply imbalance. Russia has been cooperative on previous production cuts, but it also will view the cuts as unfair. In 2014, Saudi Arabia blocked production to smoke out shale oil producers but that was harder than expected. OPEC has been trying to balance production ever since. For Russia, it will feel like cuts are making US oil producers more dominant at the expense of its own oil industry. 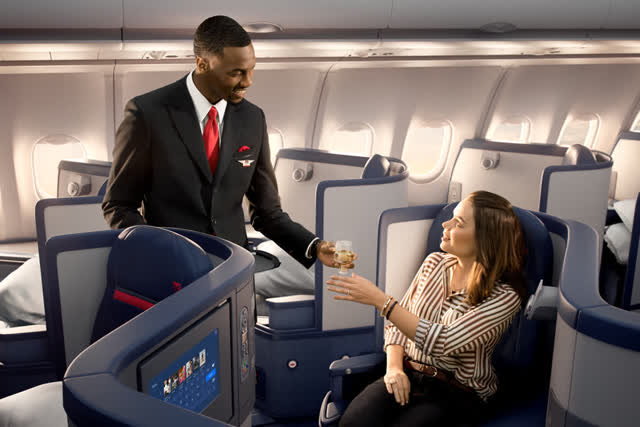 Low oil prices, even if you don’t consider it a sign of slowing economic growth and even more so if you do, also have another unwanted effect and that’s during times of low oil prices the high yield part of the cabins have lower load factors. In 2014, oil prices fell, yet companies such as Emirates, and also Delta Air Lines, saw lower load factors on their first and business class segments. That was related to the lower oil prices reduced oil and gas related travel as the oil industry was in a slowdown. If economic activity reduces, that effect will ripple through the entire cabin of an aircraft.

Changes to premium cabin load-factors and yield are the consequence of changes in fuel prices and show, yet again, the double-edged sword that low fuel prices is for airlines.

Lower oil prices provide a base for cost reductions for airlines granted there’s a fuel hedging policy to allow it. However, as an indicator of economic activity, low oil prices do not bode well for airlines. Putting it simple. If demand for air travel slows due to reduced economic activity, then there is little benefit in having a low fuel cost basis. There’s a big difference between a low fuel bill and fundamentals supporting demand for air travel being eroded. If I have a good product at a lower than usual cost, but the customers benefit from it simply aren’t there then having a low-cost basis, is useless. That really shows that low oil prices are a double-edged sword for airlines.

One thing to consider is that, contrary to the previous decline in oil prices, the recent plunge is one created by the Saudis on purpose so that plunge is not related to an economic slowdown, though if oil prices remain under pressure there will be economic impact as well.

We often see airlines cheering when oil prices fall, but I think we should always keep in mind that low prices need to fall for the right reason. If oil prices fall because demand for oil is slowing, then even for airlines that won’t be a good thing.

You could say that with the big trim on airline names a buying opportunity has manifested. It’s true that there’s an opportunity for airlines. However, if you consider that the selloff has been market wide, I think there are other names you could and should consider. If you truly feel like investing in US carriers, then among the global carriers Delta Air Lines should be considered while JetBlue (JBLU) would be a good low-cost carrier name. If you don’t know which airline stock to pick, you could consider the JETS ETF, though handpicking individual airlines is preferred.

*Join The Aerospace Forum today and get a 15% discount*

The Aerospace Forum is the most subscribed-to service focusing on investments in the aerospace sphere, but we also share our holdings and trades outside of the aerospace industry. As a member, you will receive high-grade analysis to gain better understanding of the industry and make more rewarding investment decisions.